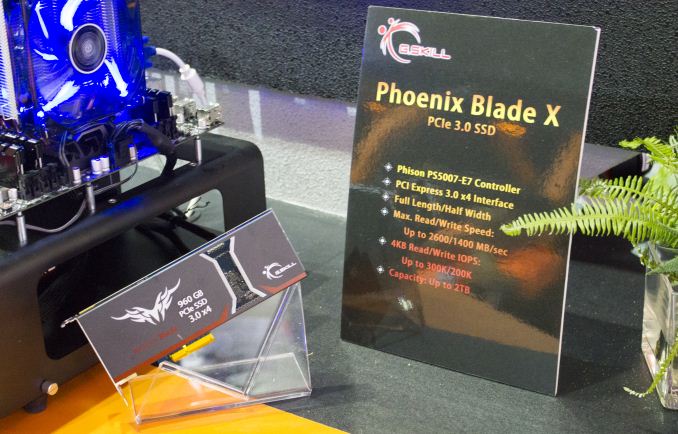 G.Skill isn't a name that is often associated with SSDs, but the company has been making SSDs as a sort of a side product for several years. We reviewed the Phoenix Blade late last year and it actually did relatively well in our tests, although its high price made it hard to justify for many. At Computex last week G.Skill showcased the successor, which will simply be called Phoenix Blade X.

Phoenix Blade X uses Phison's PS5007-E7 controller, which is a PCIe 3.0 x4 design that supports both AHCI and NVMe. G.Skill will be offering the drive as an add-in card in full-length/half-width form factor with capacities of up to 2TB.

G.Skill had a live demo at its booth, but as Phison is still developing the firmware the performance is quite far from the preliminary specifications. G.Skill didn't disclose availability, but given Phison's schedule I would expect the Phoenix Blade X to ship some time in H2'15, likely late Q3. Pricing is TBA too, although I was told that the drive should be cheaper than its predecessor.