My view on all-in-ones as compute devices does not seem to align well with what all-in-one manufacturers tell me. Nominally the sole all-in-one that gets much attention online is Apple’s iMac due to the role it has played in Apple’s line-up over the last five or so years. Nonetheless, the all-in-one manufacturers tell me that the PC-behind-a-monitor concept is growing in sales and has sufficient margin and volume to dedicate research and development towards building something customers want. I’ve not seen many AIOs in the wild – most usually in stores as separate stock check/help desks rather than in the home, but Intel has also been pushing the AIO strategy, even to the point of portable all-in-ones (massive 28-inch devices with a battery) in recent keynote speeches in the past couple of years. We’ve covered bits of the AIO market here and there, most often in news or at events such as the first 4K60p AIO at Computex last year, but we have not yet put resources to covering this element of the industry. For companies like MSI, to whom gaming is a focus, it seems that gaming branded all-in-ones are a potential viable market model. As a result, there were a couple of new concepts on display.

The main problem with all-in-ones from a gaming perspective is typically performance and graphics performance – strapping a desktop to the back of a monitor is not always the most space-efficient implementation, especially if you consider heat removal or power delivery. As a result, gaming on integrated graphics, particularly at 1080p or 4K, leaves an element of wanting more (although both Intel and AMD would argue, and our testing suggests, that you can still have a good experience at 1080p with integrated graphics on popular titles). The solution to this starts with equipping the AIO with an MXM graphics card similar to a laptop, which is what the Gaming 24GE 2QE is. 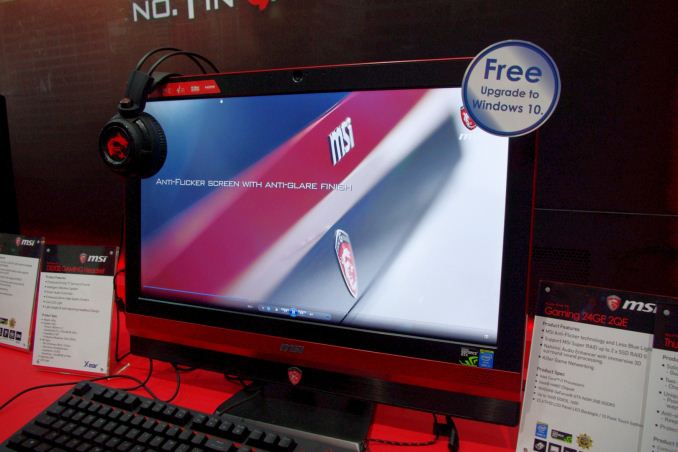 As the name suggests, a 24” IPS panel is paired with a laptop like configuration. The i7 mobile CPU on the HM87 chipset joins forces with a GTX 960M and for the model in front of us, featuring a 1080p display, should provide sufficient horsepower for eSports titles at the highest settings or AAA games at mid-range. I quizzed MSI on a 4K display, and they said that they would react to customer requests in that regard. Other hardware inside includes 16GB of DDR3L-1600, Killer networking and the inclusion of the Nahimic audio software. Storage is provided by dual SSDs in RAID 0 (‘MSI Super RAID’), and the display is a supposed ‘anti-flicker’ screen with an anti-glare finish. MSI’s terminology for this revolves around ‘less blue light’, which is perhaps something similar to the films/transparent glasses designed for at-monitor work to reduce eye-strain. MSI is currently working on the design of their gaming AIOs beyond a simple red-and-black colored livery and an MSI gaming logo.

The GTX960M at the end of the day is still a mid-range mobile component – arguably you could put one or two GTX 980Ms in such a device, much like the GT80 Titan laptop, and it would push some proper pixels. Rather than go down this route, MSI has gone a little mad and actually designed an AIO that supports a full sized graphics card. 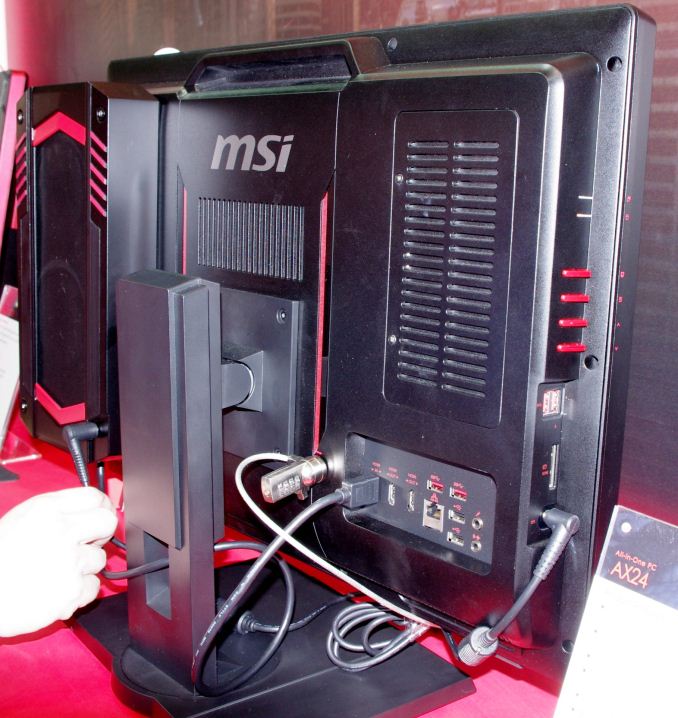 On the left hand side we see the extra parts to implement the external graphics: 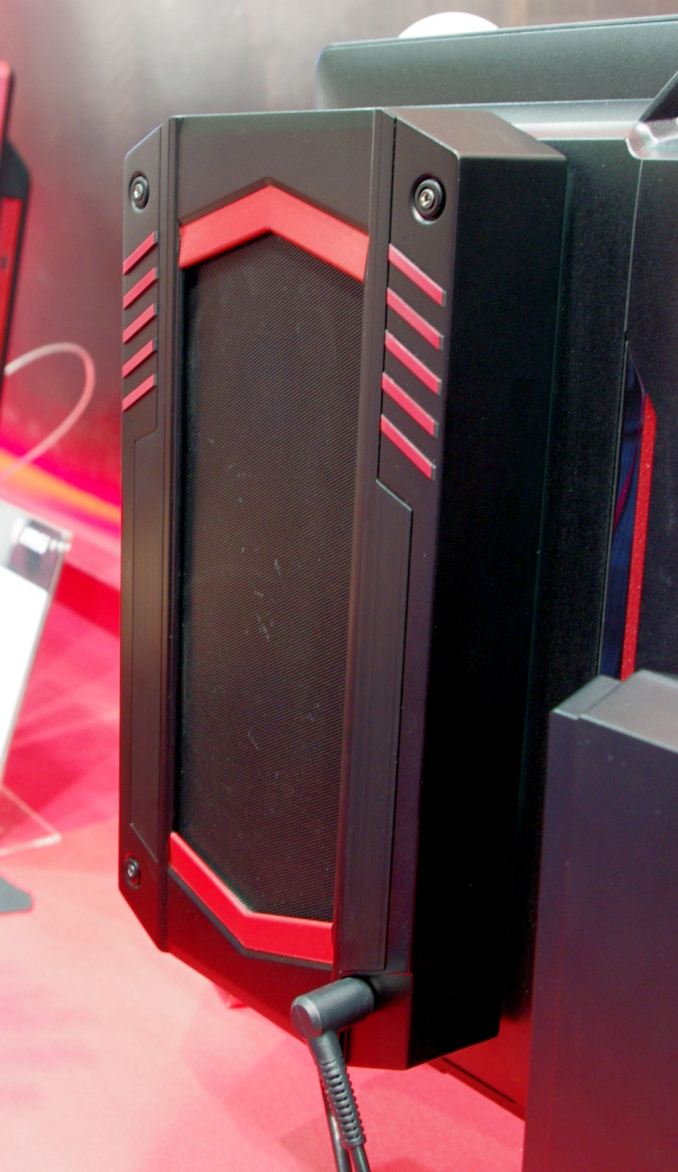 What we have here is essentially an AIO that loops in a full PCIe 3.0 x16 slot via a riser cable to a GPU mounted on the back of the panel. MSI’s design is not yet final, but they expect to be able to fit almost all reference designs in this bay with a mesh at the front for air intake (supporting blowers and other fan orientations) and a perforated edge to help with air removal:

As you can see, the GPU is mounted a little away from the panel in order to facilitate this around at least three of the edges. The GPU section itself has its own power supply module, requiring a second power brick in order to provide that power. MSI makes power bricks up to 330W, so I would imagine that any single silicon solution (i.e. non-dual GPUs) would work here. 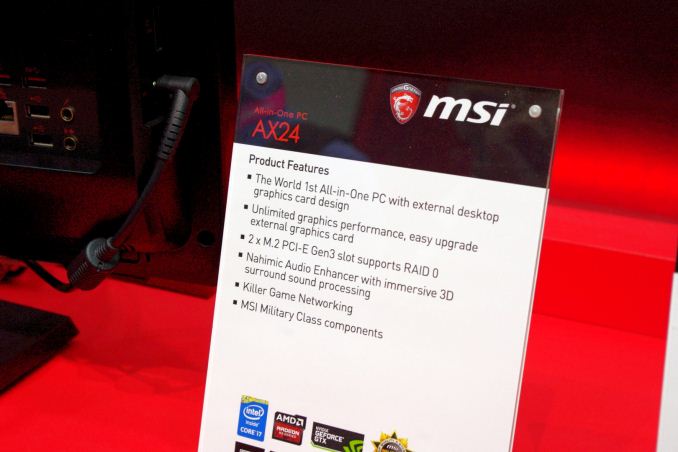 The AX24 is to be designed around Skylake, which given other motherboards we have seen so far we can get multiple M.2 SSDs in PCIe 3.0 mode as part of the package. MSI is also including Killer networking as per usual, and the new Nahimic audio processing software. They were coy about whether the system uses a soldered down CPU or a replaceable CPU though, and at what TDP we might expect it to be. Though they are looking at 4K panels, adaptive sync technology was not mentioned. One of the poignant parts here is that an AIO design is almost like a laptop design, so we might see separate buttons to enable the external GPU, or extra buttons for 100% fan usage when the design is finalized.

MSI also exhibited the Pro 24 2M all-in-one, designed for a more enterprise look and feel. The specifications were pretty much as expected, taking the anti-flicker panel from the G24 but this time using Haswell based processors, integrated graphics, a 1080P 23.6-inch panel with SSD and HDD options. 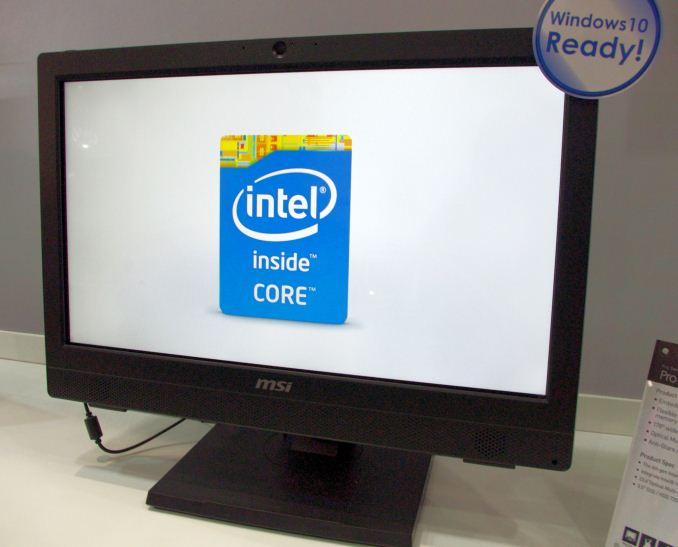 That doesn’t sound anything great I admit, but there are a couple of non-standard features worth mentioning here. The first is technically an older feature I’ve seen in years gone by to do with webcams – placing a vanity filter via a physical sliding button: 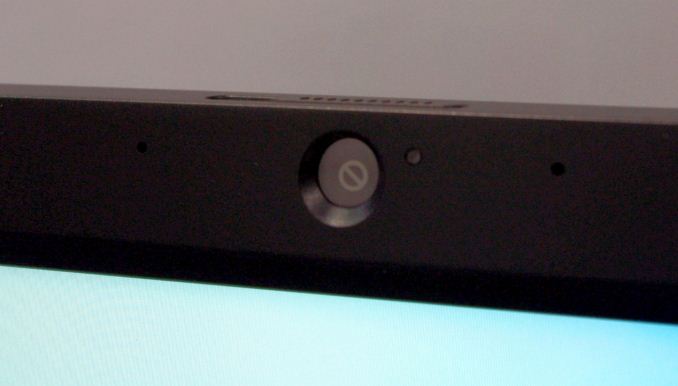 Thus for anyone paranoid about peeping, rather than taping paper over the webcam, here is a physical switch. Alongside this, based on the ‘Pro’ nature of the Pro 24 2M, we get a COM port on the rear: 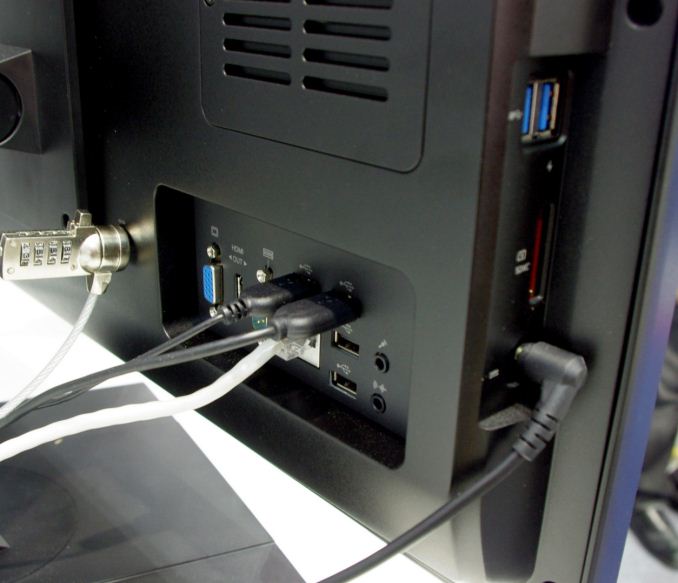 It’s a bad picture, but to the left of the network port we can see it. The device also comes with USB 3.0 ports, HDMI out, a card reader and gigabit Ethernet. 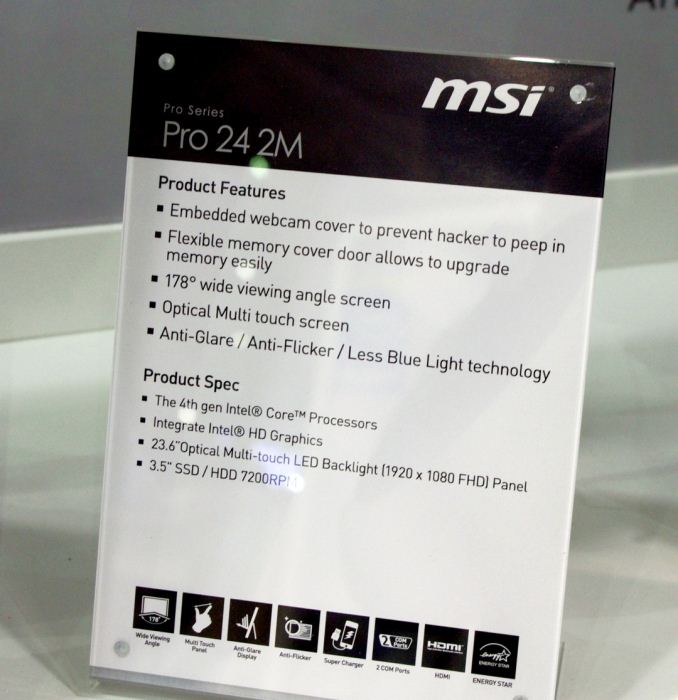