Apple Refreshes The iPod Touch With A8 SoC And New Cameras

Today Apple released a new version of the iPod Touch. The previous model of the iPod Touch was released back in 2012, and over time it has seen a few changes with the addition of a 16GB model without a rear-facing camera, and then the camera being added back to it further down the road. This 2015 model of the iPod Touch is an evolutionary improvement, but still the biggest improvement to the product that we've seen in quite some time. To see what has changed, you can check out the chart below for a comparison of the 2012 iPod Touch and this new 2015 edition.

By far the biggest improvement with the 2015 iPod Touch is the adoption of Apple's A8 SoC. This brings the internal hardware of the iPod Touch up to par with the iPhone, which is something we haven't really seen since the third generation iPod Touch as the fourth gen didn't have the 512MB of RAM of the iPhone 4, and the fifth gen used Apple's A5 SoC while the iPhone 5 sported A6. Along with the obvious improvements to performance that Apple's Typhoon cores bring when compared to the dual Cortex A9 cores in A5, there's also a doubling of memory and significant increase in memory bandwidth. Moving to A8 also brings Apple's latest ISP, which allows for features like slow-mo video recording and larger panoramas which were not possible on the previous iPod Touch. Interestingly enough, the iPod Touch is like the iPad Air 2 in that it's limited to 1080p30 video and 720p120 slow-mo, while the iPhone 6 and 6 Plus can record 1080p60 and 720p240 video.

As for the cameras themselves, the 5MP rear-facing camera of the previous iPod Touch has been bumped to an 8MP sensor. It's likely that we're looking at the same F/2.4 sensor with 1.1 micron pixels as the iPad Air 2, but this would require a deeper look to confirm. The front camera is still 1.2MP, but it has the wider F/2.2 aperture from the front cameras on the iPhone 6 and 6 Plus. Apple's A8 ISP also enables features like single-shot HDR for photos taken with the front-facing camera.

Other changes include a new 128GB capacity, and the addition of 802.11ac WiFi connectivity. Apple's listing for Bluetooth 4.1 support also confirms that their Bluetooth software stack has been updated to that version. 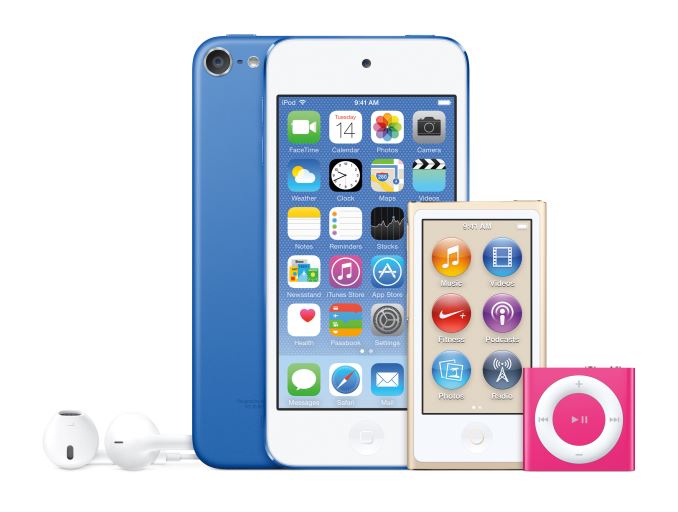 As far as the design and form factor of the iPod Touch goes, the 2015 model is unchanged from the 2012 model. Apple has revamped the selection of colors you can choose, but the chassis itself is exactly the same. This means that's we're still looking at a 4" 1136x640 IPS display, rather than the 4.7" or 5.5" displays found on the iPhone 6 and 6 Plus. Buyers interested in the iPod Nano or iPod Shuffle should note that the new colors for the iPod Touch have also been brought over to Apple's other iPods as well.

In any case, the new iPod Touch is definitely a welcomed improvement over the 2012 model. This update means that the Apple A5 SoC no longer exists in any iOS products, with the exception of the Apple TV which has no app store. A8 represents an enormous leap over A5 in every respect, and users will definitely notice the improvements in speed when running iOS 8 and soon iOS 9. I'm not sure of exactly how large the market for a device like the iPod Touch is with how ubiquitous the smartphone has become, but with Apple updating the line there's obviously some group of users who are interested in a product like the iPod Touch. For those users, the 2015 iPod Touch appears to be the best model yet.