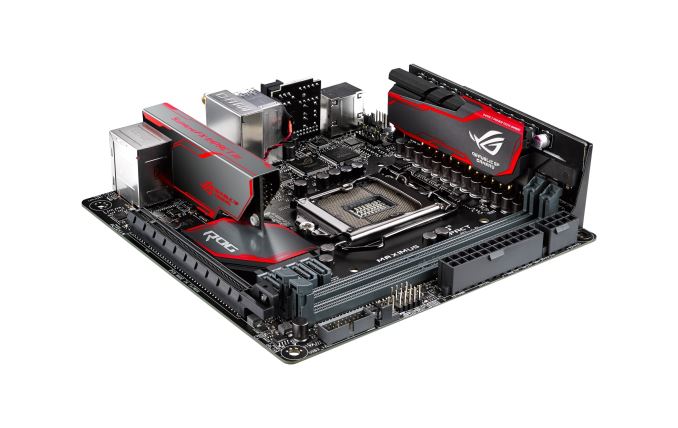 At the initial Skylake launch, we provided a rundown of all the Z170 motherboards we could get information on from the major motherboard manufacturers. Even with details on over 55 motherboards, there were some noticeable parts missing from that list as we were told to expect more as the platform developed. The Maximus VIII Impact from ASUS is one of those to come a couple of months after the initial launch, and builds on the previous Impact products from the Republic of Gamers brand. 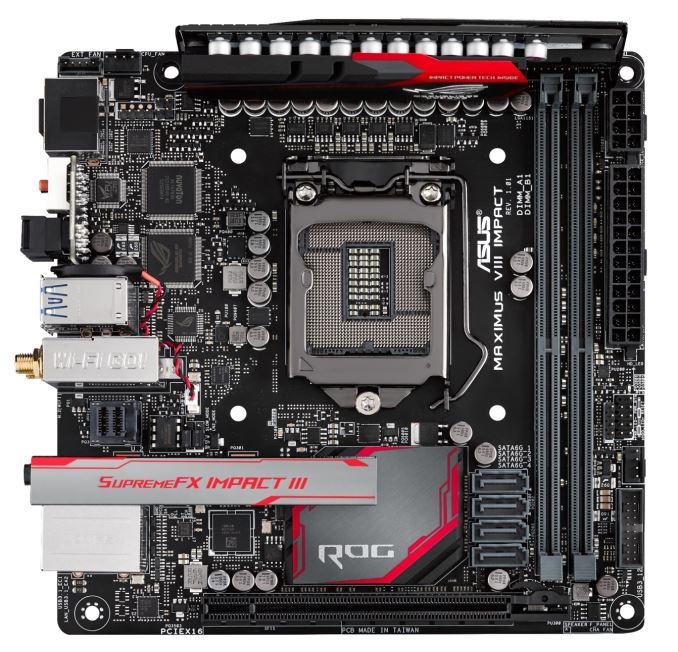 As with other Impact motherboards, the major difference between it and other mini-ITX motherboards is the power delivery on a right-angled daughter board at the top. This allows ASUS to provide a larger power sub-system, cool it appropriately, and over the multi-generational iterative design we are told the power losses involved with this method are continually minimised. From the images it is difficult to make out, but the Z170 generation of the Impact comes with a rear metal guard (look on the right hand side and over the motherboard screw hole in the top right corner). Presumably this is either for rigidity or for extra PWM cooling. Also as with other Impact designs, the power connectors are on the right hand side of the board, outside the DRAM slots, to make them easier to access for cable management. Underneath this is the front IO panel, a fan header and a USB 3.0 header from the chipset.

Being a mini-ITX board, there is really only space for two DRAM slots, and the Impact uses dual DDR4 slots with single-sided latches and support for 32GB and DDR4-4133. The latches for the slots are on the PCIe side due to the power delivery daughterboard, which might make DRAM removal with large GPUs installed more difficult. Inside the DRAM slots are four SATA 6 Gbps ports, but storage is aided by a U.2 connector near the rear panel. This is done due to the size of the U.2 connector, and it’s great to have the functionality, though it does mean that SSD 750 owners will be routing the cable over the motherboard to get to it in most cases. Back at the launch of the Z170 chipset, after the SSD 750 had been out for a month, I spoke to motherboard manufacturers about actually replacing SATA Express with U.2 onboard – here’s one of the first examples (there are a couple of others).

The last generation Impact came with an additional daughterboard for extra fan headers, to aid the two already on the motherboard. Here, instead of that daughterboard, we get the EXT_FAN header in the top right which is a breakout connector to a separate PCB containing fan headers and power. When talking to ASUS about this on previous designs, the move towards the fact that Impact owners tend to have customized systems, so having this option allows them to have a more configurable system design. 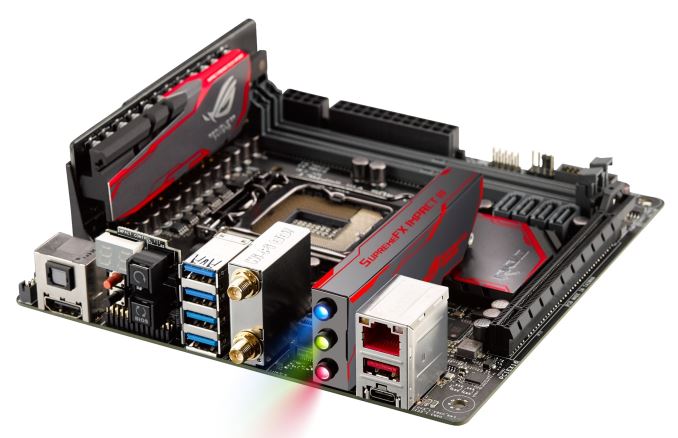 While we don’t have HDMI 2.0 here, ASUS seems to be using Intel’s Alpine Ridge controller to provide two USB 3.1 ports at 10 Gbps with type-A and type-C support. There are two Intel ICs next to the USB 3.1 ports, the smaller of which is the network controller and the larger seems to be the Alpine Ridge and is similar to other implementations – there isn’t an ASMedia controller nearby at any rate. This would be one of the first times we’ve seen the Alpine Ridge controller outside of GIGABYTE boards, perhaps suggesting that their launch day exclusivity has now come to an end. ASUS also puts on the board an Intel I219-V network controller, a 2x2 MU-MIMO 802.11ac Wi-Fi Go module, and their SupremeFX Impact III daughterboard audio solution, now encased in a full EM shield and with LED-illuminated audio jacks and headphone impedance detection/adjustment up to 600 ohms.  The rear panel also supports BIOS flashback, four USB 3.0 ports, and their Impact Control III information/control panel.

Because this information is from the ROG team and not an ASUS regional office, pricing and availability is not yet known. Although typically an ROG team announcement in the past has become a 2-4 week lead time to US deployment in the past, and previous Impact motherboards have been in the $230-$280 area.

Update 10/11: We've been told that the Max VIII Impact will retail for around $249 and be available next week in North America.