Though AMD has made a number of changes to their drivers under the hood, none of Crimson’s changes will be nearly as obvious as what they’ve done to their control panel, the very face of their drivers. After nearly a decade with the Catalyst branding and the Catalyst Control Center, AMD has ditched the CCC for a new settings application they call Radeon Settings. Based on the QT framework, Radeon Settings is the most radical departure to the design of AMD’s control panel since the introduction of Catalyst Control Center all of those years ago.

A big focus on Radeon Settings has been to simplify and modernize the look and behavior of AMD’s control panel without hiding the power behind it, in order to better address the vast range of capabilities in the users of AMD’s APUs and GPUs. Many people like to simply hop on to their electronics and get to work. Others are not comfortable until they have poured over every option and changed them to their liking. Still more of us are somewhere in the middle, leaving good enough alone until it is no longer good enough and needs to be fixed. Regardless any in the latter two categories don't like information overload or hunting for the right option to fix their problem. So let’s see where and how AMD's new Radeon Settings improves on Catalyst Control Center and where those improvements lie.

First let’s start with the game profiles, which contains a couple of bigger additions in Radeon Settings relative to Catalyst Control Center. Custom game profiles for 3D settings are not new to Crimson, and once you are in the 3D settings page of either CCC or Radeon Settings, entering a new game or application to issue its own custom profile isn't any harder or easier in either piece of software. But there are two new additions that will be welcome for those that use them. Both overdrive (overclocking) and framerate target control profiles can now be configured on a per-application basis.

Entering the per-application profiles page for the first time, AMD runs a quick scanning routine to detect which games are installed and to provide profiles for them. I did notice a pause of a few seconds as the program presumably pulled data from my secondary HDD. Though the pause didn't continue with subsequent startups so this may not be a frequent occurrence. Not all of my games were found, though adding new games is a reasonably straightforward process involving a click of the add button and navigating the file system to find a given game's executable.

The ability to launch games from within Radeon Settings is a nice alternative to the previous process of switching app windows and then starting the game in question. Some games appear to be incapable of launching from Radeon settings, which may be tied to a menu being thrown by Steam before launching the game, but I couldn't find a certain cause. Non-game applications can of course be added and presumably could make custom profiles more interesting by allowing, for example, a cool and quiet configuration for working with video editing suite and a hot and fast setup for gaming afterward.

The video playback options offer a few presets and single custom option. Unfortunately the video options here seem to only work on local video and not internet video. Most likely this is because Google is moving to using the VP9 codec on YouTube, which isn't hardware accelerated on AMD's GPUs, and hence bypasses their video processing. Moving on there is a Demo On/Off button that left me confused for a day, thinking it should bring a demo video up within the window. Later when trying out these settings on some videos of my own I discovered that the demo mode will work on local video through what appears to be any media player. Currently there are five settings to tweak with: Sharpness, Colour Vibrance (ed: Canadians), AMD Steady Video (image stabilization), Fluid Motion Video (interpolation), and Brightness. 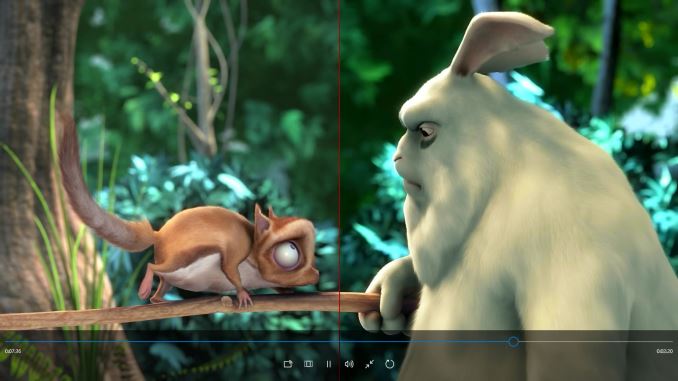 The new display settings page feels significantly watered down relative to CCC, with only the options to for FreeSync, Virtual Super Resolution, and GPU Scaling available. There is a button for "Additional Settings" that leads to "Radeon Additional Settings", which is a stripped-down version of CCC (and identified by AMD’s files as CCCSlim). For now this is where AMD appears to put any settings that didn't fit into the condensed Radeon Settings or couldn’t easily be handled via a QT application. As a result nearly all of the settings therein are display related. It's great that effort was made to not lose functionality in the name of elegance, but I do have a couple of thoughts that will be covered when I discuss user experience.

Separate from the display settings, Eyefinity gets its own tab as part of AMD’s efforts to simplify the Eyefinity setup process. However like the display settings pane, Eyefinity’s options have between split between Radeon Settings and Radeon Additional Settings. The Quick Setup option available in Radeon Settings will attempt to auto-configure an Eyefinity configuration. Otherwise manual controls will take you into Additional Settings, where the options are otherwise unchanged from what CCC offered. 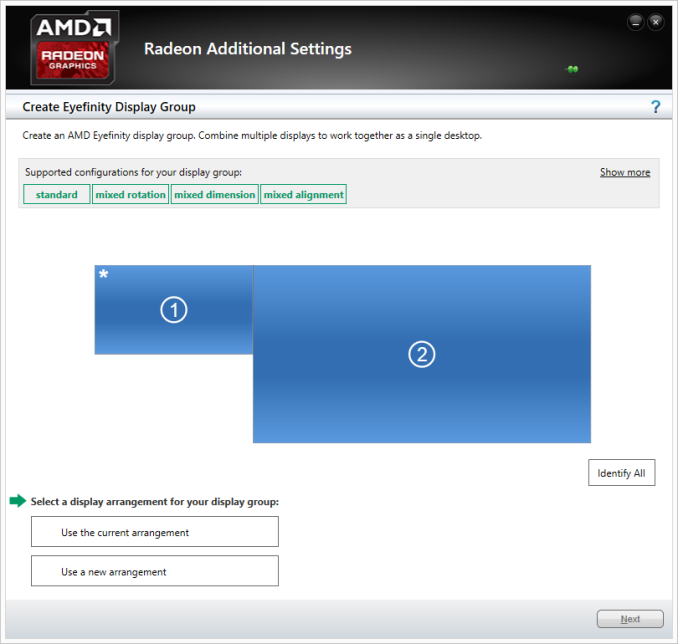 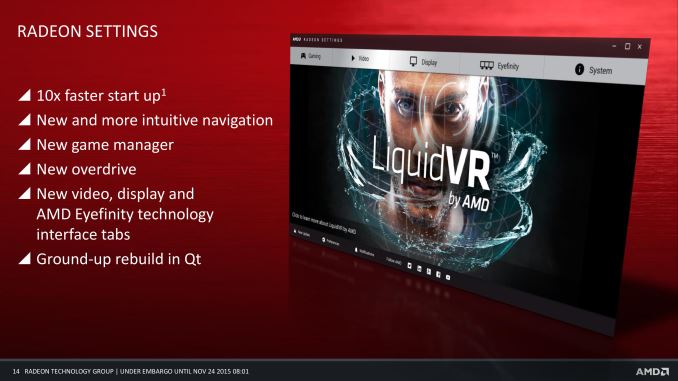 Overall the menu system does a very good job reflowing/rearranging pieces of the interface to fit the amount of space it is given. With the number of websites out there that struggle to make good here I find it oddly refreshing to see a program adapt appropriately. Keeping with interaction it is very clear that an effort was made to eliminate unnecessary information from the display and also to ensure that any important information is included at the same time. Props to all involved in that effort, mission accomplished in my opinion.

I also noticed a complete absence of right click menus so far as I can see. Which then caused a thought to hit me: this interface may well be optimized for touch. Unfortunately I don't have any mobile devices running AMD graphics, and with that my understanding is that there are not many Windows devices with both AMD graphics and touch screens. But this does demonstrate to me how forward thinking the designers were with this software. Which will leave AMD prepared should the landscape continue to change in the future.

A personal annoyance that cropped up was that I frequently found myself clicking a side mouse button when I wanted to go back to a previous page, and also confirmed that backspace did nothing either. I may be a rare case but that is how I have come to go back while surfing the web. It became a bit of a bummer to use the mouse cursor for all interaction with no other shortcuts.

One last possible issue, though I can see why it was done as such, is the "Additional Settings" button leading Radeon Additional Settings, aka the CCCSlim. I can see the good here because good design dictates that anything which can't be made elegant should be placed out of site and out of mind. Though in the same sense that it was jarring in Windows 8 to be exploring options in the "modern" interface and periodically get thrown into a classic windows style menu, the difference in both visual design and layout can feel like a stumble. I don't think the fix would be to shoehorn this extra menu into Radeon Settings, but I do feel the experience could be more consistent. 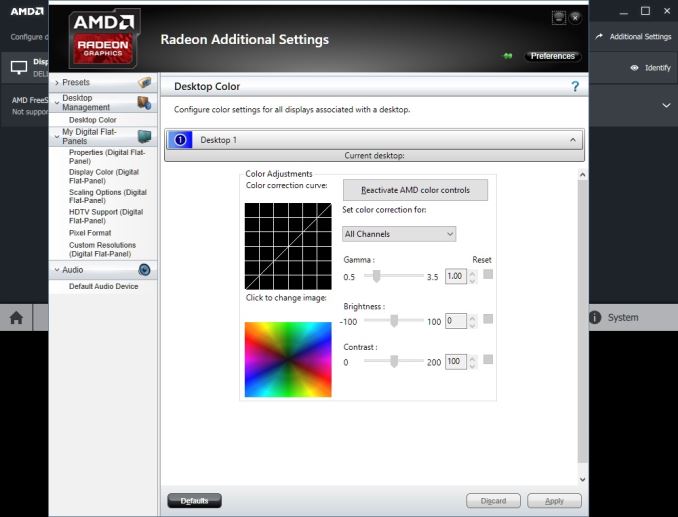 Meanwhile the systray menu is very concise and has only what is needed. Included are simply the option to open Radeon Settings, select a Graphics Profile or Video Profile, and hide the systray Icon. Granted the menu is quite terse, but this software is also very new. We will only know with time where AMD will take this and if it, like many things do with age, bulks up in the future.

Finally, I’ll quickly touch upon performance. One of the efforts AMD is making with Radeon Settings is to speed up the loading time of their control panel, and while CCC is not bad in modern times (particularly on high-end computers), CCC has also never been known for being quick. I haven’t had any particularly slow machines to try out Radeon Settings on (e.g. an AMD AM1 platform), but even running it on a Sandy Bridge desktop, AMD has clearly put together something snappier than CCC. The initial load takes barely a second, and subsequent loads may just as well be instantaneous. NVIDIA’s control panel, by comparison, can take multiple seconds to load even on a quick machine, so AMD has definitely set a new high bar for the video card industry as far as control panel performance goes.

Overall I felt that using Radeon Settings was much less of a mental burden and that finding the desired options was a much smoother process. One of my largest issues with CCC was logging into a brand new install of windows and needing to fix a couple of settings that I may have changed a few times already in previous installs, but upon opening CCC I would have to click through every single category to find what I'm after. Not to disregard the efforts put into Catalyst Control Center, but a well thought out design will communicate to the user how to interact with it. Time will be necessary to know for sure but my early impression and opinion is that Radeon Settings does a great job of telling the user what can be done, how to find further functionality, and hiding any tools not needed at the moment. A pleasant improvement that will hopefully hold out through the years to come.