The Silver Lining of the Late AMD Opteron A1100 Arrival

But not all servers are compute limited. Quite a lot of server tasks are I/O limited. Think static webserving, reverse proxys (Varnish server), in memory key value stores (Memcached), all kind of network servers and "cold" storage servers.

With 14 SATA ports and two real 10 Gb Ethernet ports, AMD's A1100 is a great place to start to build a storage device. Considering that quite a few storage devices now use a quadcore A15, which is limited to 4 GB of RAM (16 GB with PAE tricks), an octal core A57 that can address 128 GB opens up new opportunities. The quad core A1120 will do nicely even though it might consume up to twice as much (25W) as Annapunra Labs Alpina AL5140 SoC (Quad A15 at 1.7 GHz), which needs around 10W. In a storage device with 16 disks, 10W should not be a deal breaker, especially if you can offer more caching, faster encryption and higher overall performance.

The specs do not look bad for a caching server either, as 32 GB RDIMMs are less expensive per GB than 8 GB RDIMMs now.

Software Support, or Why it Took So Long

The other big question is of course why A1100 took so long. The answer to that is actually pretty simple. Some of the building blocks like fine tuned ACPI and PCI Express support for ARM CPUs were not initially adapted to the server world, and AMD needed to wait for those to come along to give A1100 a fighting chance. 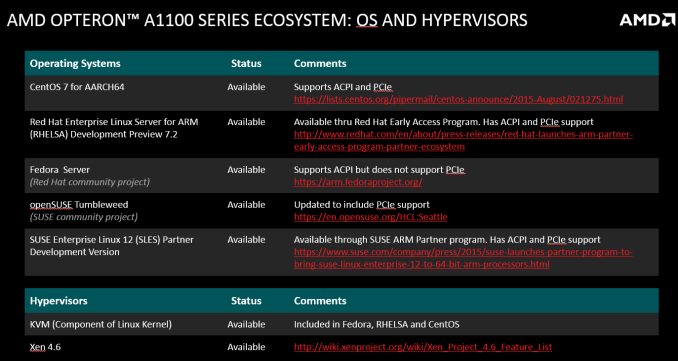 Just look at the slide with software support and see the comment "supports ACPI and PCIe". That would look pretty odd on an announcement of an x86 server CPU, but it is relatively new for a 64 bit ARM server environment. You might ask yourself how our Applied X-Gene server worked well with Ubuntu server nine months ago. The X-Gene server ran a specially adapted version of Ubuntu. That is fine as a temporary solution, but unless the modifications go "mainstream linux", each new version must be adapted again to make it work with your server. Costly and time consuming, so AMD went the other way, making sure that the necessary improvements were part of the official Linux kernel.

For the Ubuntu fans: the A1100 runs on top of ubuntu 15.10. According to AMD, it is fully functional but at the moment without support of Canonical.